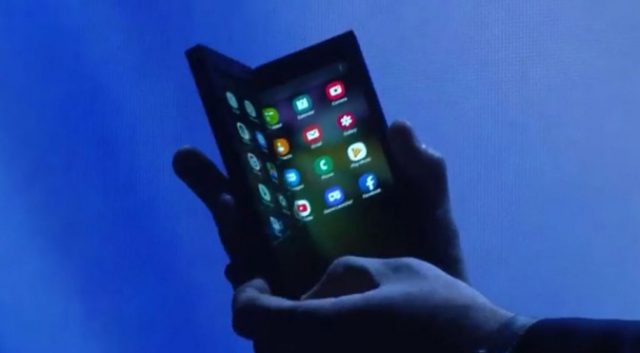 After showing its presence in the rumor mill for really long, Samsung finally showcased its first foldable smartphone at its recent Developers Conference. Now, a new leak suggests that the smartphone could soon get an official launch.
According to a report by Yonhapnews.co.kr, the foldable smartphone, purportedly called the Galaxy F, is speculated to arrive in March 2019. Additionally, the much-rumored Galaxy S10 with 5G support could launch alongside.
To clear the air, the non-5G Galaxy S10 is expected to get unveiled in February, presumably during MWC 2019 in Barcelona.
The alleged Galaxy F is expected to feature a 7.3-inch screen size, which will decrease to 4.6-inch when folded. The display is called Infinity Flex display with a screen resolution rated at 2,152 x 1,536 pixels.
While not much is known about the device, the smartphone is expected not to support 5G and could cost users a fortune (around $1,770).
The Galaxy F is expected to collaborate with Google for its operating system with its own One UI on top. Additionally, the smartphone will come with the new Multiactive Window feature which will allow users to run three apps simultaneously.
Furthermore, it is suggested that Samsung is aiming to sell around one million foldable smartphones in 2019 across 120 countries.
However, there is no concrete information available currently. To know what the foldable smartphone’s final look is like, we need to wait until March. So, stay tuned!